The Boonville Volunteer Fire Department is the primary agency for emergency services and hazard mitigation in the North Yadkin Fire District including the Town of Boonville, NC. Our 39 square mile fire protection district has a population of over 4,300 and consists mostly of single family and multi-family residences in our municipal and rural area. Our district is also home to numerous businesses, manufacturing centers, and farms. Our department is a combination style fire department composed of a staff and membership of dedicated and professional volunteer and career firefighters. We staff paid firefighters on weekdays from 8am to 5pm to help supplement staffing while the majority of our volunteer members are at their respective jobs.  Our department operates out of two fire stations with 8 total apparatus.  Along with providing services to our district, we also respond to assist neighboring fire departments which in turn respond to assist our department when needed.  Our department provides the following services:

-Fire Suppression: All fire related emergencies where life, property or environment are at risk.

-Haz-Mat & Other Hazards: Any hazard to life or the environment such as downed electrical lines, odors, chemical leaks/spills (Haz-Mat Operations Level), and downed trees in roadways.

-Fire Prevention & Public Education: Provide fire and life safety education to all citizens within our community including installation of smoke alarms and completion of pre-incident plans at all businesses.

The Boonville Volunteer Fire Department was established in 1941 making it the first department in Yadkin County and one of the oldest in the area.  The first fire fighting equipment they obtained was 1000′ of hose which was placed on a trailer and pull by a vehicle to fires they responded to.  These firefighters were notified by telephone when there was a fire.  There was no siren, radios, or pagers being used in those days.  The trailer was maintained in a central location and there wasn’t even an actual fire station to begin with.  The department was not officially recognized by the State until 1952 when a the department was able to meet additional equipment requirements.  After being recognized officially by the state, the first official Fire Chief, Harvey Smith was appointed to command the department.  it was not until 1955 when the department received it's first actual fire truck which was hand built for just under $3,000.00.  Later in 1959 a second more official fire truck was purchased for just under $10,000.00.  During this period, it is important to remember that no local government funding supported the department and all funding was through donations, fundraisers and grants.  In terms of response area, the department responded in a 20 mile radius from the fire station including into neighboring Surry County. 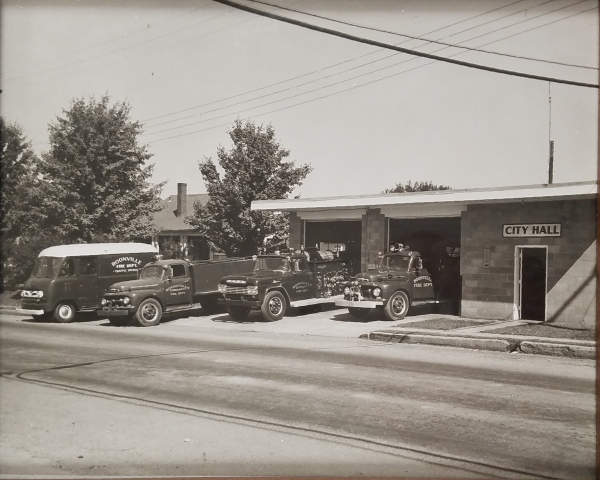 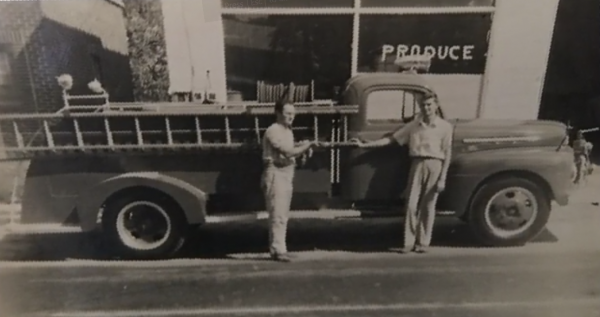 The department when first established was headquartered at Town of Boonville's Harvey Smith Municipal Building on the north side of downtown and remained there until our current station was built on the south side of downtown in 1997.  Through the years our apparatus and equipment have evolved and improved to stay ahead of the ever changing dynamic of the fire service.  The department has expanded its services over the years as well to ensure that our citizens are receiving the best service possible.  Services have expanded from just fire protection and now include medical, rescue, hazmat and other incident responses.  Through the years, call volume and demand for our services have significantly increased due to the expansion in services offered by the department and from growth in our community and neighboring ones in which we assist.  To aid in handling the increased demand for service and to ensure the best service to our citizens, our department changed from an all volunteer department to a combination department made up of both volunteer and paid firefighters in the early 2000s.  These paid firefighters now work on weekdays during the time many of our volunteers are at their own jobs and may not be available to respond to calls.  This ensures a timely response on those days.  We are still heavily dependent on dedicated volunteers and are always looking for new members. 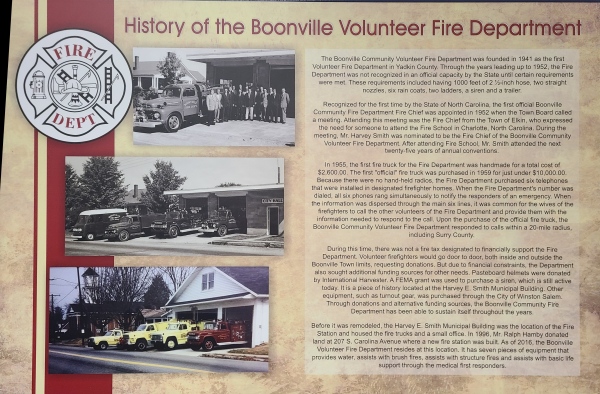 Between 2010 and 2020, the department made several advancements with a principle goal of continuing to improve service capabilities and to lower the insurance rating for the rural part of our district which at the time was still an ISO Class 9 area.  The Town of Boonville for many years by this point had been classified as an ISO Class 5 insurance district thanks to efforts of the fire department and the town water supply system.  The rural areas outside of town however having no municipal water supply presented a significant challenge in regard to improving the ISO rating.  In the time period leading up to the next ISO assessment, the department and it's members dedicated countless hours to achieving a lower ISO rating in the rural area of the fire district.  This included purchasing of additional apparatus and equipment, updating records, establishing new rural water points and a tremendous amount of time training.  One of the first big steps in the preparation phase was purchasing the department's first aerial ladder truck.  Through a period of investigative research and consultation, it was determined that the department needed a ladder truck to address the needs of the district for both operational success and improvement of the ISO rating.  Work began to find a truck that would fit the needs of our district and in the summer of 2018, a truck was found.  The truck was a used truck from the Horsham Fire Department in Pennsylvania and had been greatly taken care of over the years.  Upon testing and inspection of the truck, it was determined that this truck was right  Boonville.  The truck was purchased at a tremendous savings compared to the cost of a brand new truck and was received in October of 2018.  The truck was placed in service in the early part of 2019.  In 2019, thanks in part to awarded grant funding, the department achieved the ststus of being a Light Rescue provider by the Stste of NC.  This was accomplished by the purchase of additional rescue equipment of which most was assigned to Truck 13.  This was also accomplished thanks to the qualifications in technical rescue several of our members achieved through training.  Prior to 2019 the department only had 5 rural water points to obtain water for firefighting in the rural area of the district.  These water points (ponds and creeks) are a vital part of success for firefighting in rural areas and is a critical element for improvement of an ISO rating.  Between 2019 and 2020, the department was able to obtain and certify 47 additional water points.  This was able to provide a water source for firefighting no greater than 1.5 miles away from any given location in our district.  In the fall of 2020, the department was assessed by the NC OSFM for a less than 9 rating inspection for the entire district including the Town of Boonville.  The results of the inspection were delivered in January 2021 and the department was awarded an ISO Class 3 rating.  Class 3 is the lowest ISO rating held by any fire department in Yadkin County and only one other department in the county has a Class 3 rating.  Class 3 puts our department in the top 10% of all departments in NC and in the country.  Only around 130 of over 1500 departments hold this rating in NC and only around 3,500 of over 40,000 departments across the country.  This was truly a milestone for our department.  In early 2022, the department achieved a Medium Rescue qualification after purchasing additional rescue equipment much of which was purchased with grant funding that the department applied for and was awarded.  In December of 2022, the department purchased another used fire engine to help update our fleet and better serve the community's needs.  The new to us engine was purchased from the Clemmons Fire Department and was a 2004 Pierce Arrow XT and would serve as Squad 13, the department's rescue engine.  This allowed for a better distribution and a larger compliment of rescue equipment for our first out rescue apparatus for in district rescue calls.

This brings us to the department we are today.  Though a lot has changed over the years, one thing that has stood to be is the dedication of our members and the purpose for which we exist.  We are "Dedicated to Protect Lives and Property"!

This site has been viewed 40,262 times.
News
Apparatus
FollowTweet
Maintained by the members and staff of Boonville Volunteer Fire Department. Designated trademarks and brands are the property of their respective owners. Copyright © 2006-2022. YourFirstDue Inc. All Rights Reserved. Content on this web site is supplied by Boonville Volunteer Fire Department. YourFirstDue Inc. cannot be held responsible or liable for any content, text, pictures, or any other media found on this web site.
Management login
Powered by